Ratchet & Clank: Rift Apart is a sequel that clings tightly to its storied heritage, never once betraying the foundation that was laid in 2002. From the second I took control of the fuzzy Lombax again, my muscle memory kicked in, and I was flipping through the air and smashing boxes like I had never stopped. Insomniac Games made a sequel for longtime fans that hits the right classic notes, feeling like a glorious reunion, even though these characters never left our side. The heavy doses of nostalgia are handled with care but are only half of what make this sequel a must-play for PlayStation 5’s early adopters.

Rift Apart is PlayStation 5’s showpiece. It checks all of the next-gen boxes, dazzling with its power, speed, sound, and control. When coupled with this series’ tried-and-true gameplay, the experience absolutely sizzles, creating a fun rollercoaster ride from start to finish.

One of the coolest technological feats in Rift Apart is how Ratchet travels between dimensions. As he battles his way across an alien world, a window into another reality may appear in front of him, and he can bravely leap through it. The transition between locations happens in a flash, and Ratchet is suddenly standing in an entirely different world or reality. These transitional moments are as magical and fun as they sound, often wowing you with just how different the next world is compared to the one you are currently standing in. 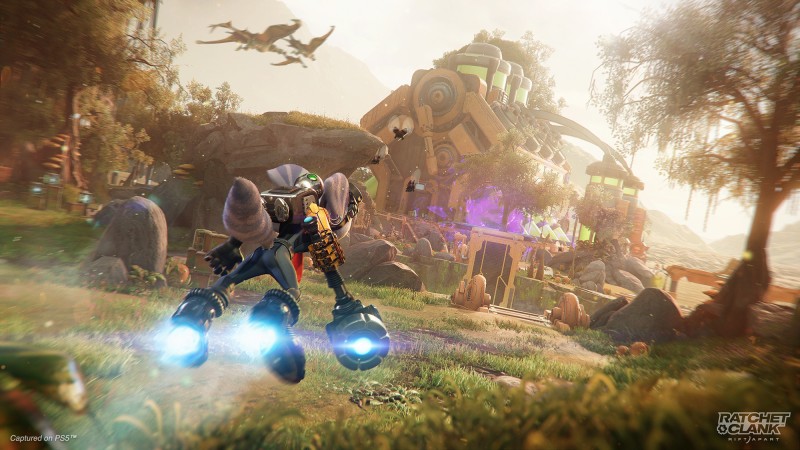 Insomniac sometimes uses these quick transitions for exciting gameplay sequences, like riding an out-of-control beast at breakneck speeds through a series of dimensional rifts. Portals are also placed in combat areas to allow for quicker environmental traversal, a touch that sounds small, but adds another layer of strategy to the mix.

Through a nicely penned story, we quickly learn Ratchet and Clank are bouncing between two specific dimensions, both holding the same planets and characters. The always amusing Doctor Nefarious thinks he has a better shot at conquering the alternate dimension. Since events have unfolded in different ways in each reality, the characters could be radically different. For instance, in the reality fans know, we have Skid McMarx, a burnout surfer who didn’t do much. In the other dimension, Skid is a skilled resistance fighter named Phantom. Ratchet also appears to have a double in the other existence, and her name is Rivet, a new character who breathes fresh life into this series. 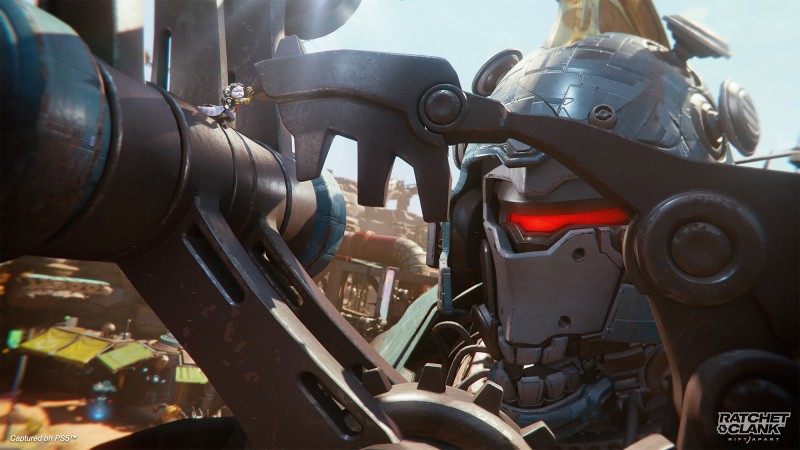 Rivet energizes the story and is brought to life through a number of mysteries that give her a unique pulse. As her tale unfolds, Insomniac delivers satisfying answers as to who she is and what happened to her. She is playable for half of the adventure, but is sadly a carbon copy of Ratchet on the battlefield. She doesn’t have any distinguishing features that set her apart. The duo shares the same weapons, upgrades, armors, and experience points earned – a solution that reduces confusion and keeps the focus on making progress that, again, strips each character of individuality. Yes, this plays into the duality of dimensions concept, and keeps the gameplay flowing in a consistent way, but it also feels like a missed opportunity to change things up and truly create a new character.

While retaining the same colorful cartoon look we’ve come to expect from each installment in this series, the level of detail in Rift Apart is through the roof in jaw-dropping ways. Don’t be surprised if you stop dead in your tracks to inspect the detail on the most trivial of things. I marveled at the wool on a sheep, and audibly said “wow” when I saw the sheer scale of a Godzilla-sized robot that looms over one of the levels. I also realized that, given how densely populated areas are, it’s a little harder to locate stacks of breakable boxes, which I consider a positive, as I was paying more attention to the environment. There’s that much going on in each world. Insomniac’s artists did a bang-up job dreaming up colorful alien worlds for the player to traverse. Trust me when I say you should play it in Performance RT mode (which delivers 60 frames-per-second and raytracing). 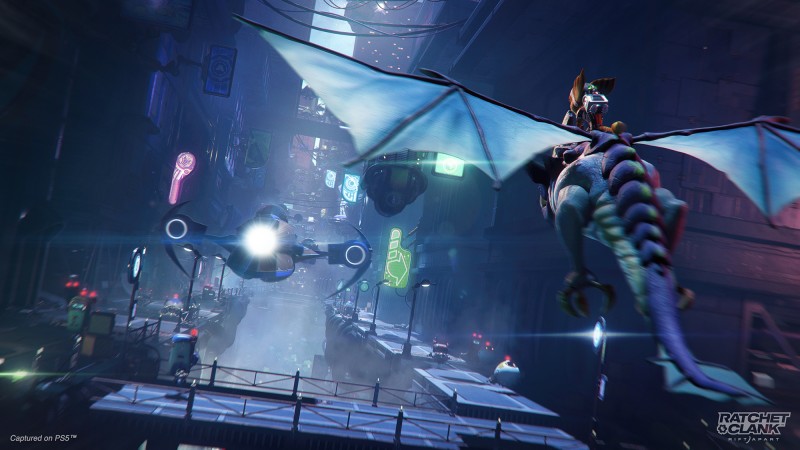 The DualSense controller also mesmerizes at times, enhancing each weapon with tailored haptic feedback and clever adaptive trigger functionality. Each gun delivers a distinct and satisfying kick – whether it’s the rhythmic pulsing of the Ricochet Gun or being able to feel the Negaton Collider cook in your hands before it sends out a rattle with its energy blast. I also really like how each gun offers two firing modes: a light tap of the trigger performs the first, which is usually more precise and conservative, and a full pull basically unleashes hell.

This series has always been known for its inventive weapons and just how different they are from one another, and Rift Apart delivers a nice selection of firearms that gives the player everything they need – like a rocket launcher and sniper rifle. The most inventive weapon this time around is the Topiary Sprinkler, which turns enemies into beautiful shrubbery, freezing their movements for a few seconds. This weapon, like many in this grouping, has great combo potential, and help keep mobs at bay. The new dimensional dash is the handiest new addition to combat, allowing for laser beams and melee strikes to be evaded with ease. This move also aids traversal in fun ways.

Most missions that Ratchet and Rivet attempt are acceptable fun, and regularly convey enormous set-piece minutes with story successions sewn directly into them, actually like Insomniac’s Spider-Man games. You can uninhibitedly move among planets and decide whether you need to handle a side mission or the following story beat. Some adversary types are rehashed somewhat a lot (particularly in the field), yet the activity is pleasantly enhanced, and the stream between areas is incredible. I was anything but a major fanatic of the Clank or bug bot minigames, yet they offer a breather at the correct occasions from the furious battle.

I had a grin all over almost the entire way through Ratchet and Clank: Rift Apart. It’s an incredible continuation of the arrangement that is only a delight to play. It takes your eye with its staggering vistas, makes you care about the characters, and is stacked as far as possible with fan administration (particularly in the substitute measurement and a weapon you need to gather). Light sleeper unmistakably had a ton of fun chipping away at this game and leaves us with a bother for a much greater experience just before the credits roll.