We will discuss the most important errors that we often encounter in C++ that are equally critical indeed. Apart from the system and semantic errors and exceptions that occur from time to time, we also get other critical errors that affect the running of programs.

These errors mostly occur towards the end of the program at runtime. Sometimes the program gives proper output and then the error occurs. 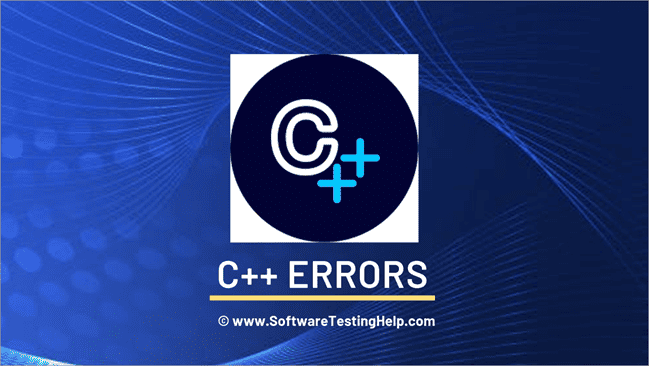 In this tutorial, we will discuss three types of errors that are critical from any C++ programmer’s point of view.

We will discuss the possible causes of each of these errors and along with the precautions that we can take as a programmer to prevent these errors.

An “Undefined Reference” error occurs when we have a reference to object name (class, function, variable, etc.) in our program and the linker cannot find its definition when it tries to search for it in all the linked object files and libraries.

We discuss some of these reasons below:

#1) No Definition Provided For Object

This is the simplest reason for causing an “undefined reference” error. The programmer has simply forgotten to define the object.

Consider the following C++ program. Here we have only specified the prototype of function and then used it in the main function.

So when we compile this program, the linker error that says “undefined reference to ‘func1()’” is issued.

In order to get rid of this error, we correct the program as follows by providing the definition of the function func1. Now the program gives the appropriate output.

Yet another cause for “undefined reference” error is when we specify wrong definitions. We use any object in our program and its definition is something different.

Thus when the program is compiled, the compilation is successful because of the prototype and function call match. But when the linker is trying to link the function call with its definition, it finds the problem and issues the error as “undefined reference”.

Thus to prevent such errors, we simply cross-check if the definitions and usage of all the objects are matching in our program.

The way to resolve this error is to compile both the files simultaneously (For example, by using g++).

Apart from the causes already discussed, “undefined reference” may also occur because of the following reasons.

When we specify wrong project types in C++ IDEs like the visual studio and try to do things that the project does not expect, then, we get “undefined reference”.

If a programmer has not specified the library path properly or completely forgotten to specify it, then we get an “undefined reference” for all the references the program uses from the library.

#6) Dependent Files Are Not Compiled

Apart from the causes discussed above, the “undefined reference” error can occur in many other situations. But the bottom line is that the programmer has got the things wrong and in order to prevent this error they should be corrected.

The error “segmentation fault (core dumped)” is an error that indicates memory corruption. It usually occurs when we try to access a memory that does not belong to the program into consideration.

Here are some of the reasons that cause Segmentation fault error.

Hence when we dereference it in the next line, we are actually trying to access its unknown memory location. This indeed results in a segmentation fault.

The next program shows a similar case. In this program also, the pointer is not pointing to valid data. An uninitialized pointer is as good as NULL and hence it also points to unknown memory location. Thus when we try to dereference it, it results in a segmentation fault.

In order to prevent such errors, we have to ensure that our pointer variables in the program point to valid memory locations always.

When we have recursive calls in our program, they eat up all the memory in the stack and cause the stack to overflow. In such cases, we get the segmentation fault as running out of stack memory is also a kind of memory corruption.

Consider the beneath program where we compute the factorial of a number recursively. Note that our base condition tests assuming the number is 0 and, brings 1 back. This program turns out consummately for positive numbers.

But what happens when we actually pass a negative number to a factorial function? Well, as the base condition is not given for the negative numbers, the function does not know where to stop and thus results in a stack overflow.

This is shown in the output below that gives segmentation fault.

Now in order to fix this error, we slightly change the base condition and also specify the case for negative numbers as shown below.

Now we see that the segmentation fault is taken care of and the program works fine.

The unresolved external symbol is a linker error that indicates it cannot find the symbol or its reference during the linking process. The error is similar to “undefined reference” and is issued interchangeably.

We have given two instances below where this error can occur.

#1) When we refer a structure variable in the program that contains a static member.

In the above program, structure C has a static member s that is not accessible to the outside programs. So when we try to assign it a value in the main function, the linker doesn’t find the symbol and may result in an “unresolved external symbol” or “undefined reference”.

The way to fix this error is to explicitly scope the variable using ‘::’ outside the main before using it.

This case is demonstrated below:

In general, in case of an “unresolved external symbol”, the compiled code for any object like function fails to find a symbol to which it makes a reference to, maybe because that symbol is not defined in the object files or any of the libraries specified to the linker.

In this tutorial, we discussed some major errors in C++ that are critical and can affect the program flow and might even result in an application crash. We explored all about Segmentation fault, Unresolved external symbol, and Undefined reference in detail.

Albeit these blunders can happen whenever, from the causes that we examined we realize that we can undoubtedly forestall them via cautiously building up our program.